Veterinary dentistry: an unusual gingival lesion and the approach to treatment 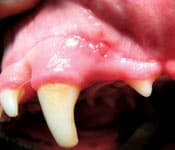 Photo 1: A fistula is present at the mucogingival margin secondary to necrotic pulp in the traumatized canine tooth.

Last month's case series article described an unusual lesion at the mucogingival line distal to the left maxillary canine in a dog (Photo 1). Radiography confirmed that the canine tooth was non-vital, resulting in destruction of the periapical bone and the production of the fistulous tract.

Therapeutic considerations are aimed at the underlying cause. The options in our case are extraction or root-canal therapy. Both have the potential to resolve the periapical inflammation/infection and the resulting fistula. The practitioner's responsibility is to inform the client of the positive and negative aspects of both procedures and guide the decision based upon all factors involved.

When weighing the therapeutic options in this example, there are several components to explore. The order of importance may vary widely among individuals. The most predictable approach for resolution is extraction. It is in most cases a permanent resolution with little follow-up other than re-check confirmation of proper healing.

Root-canal therapy carries a good prognosis and, although not quite as predictable, carries an 88 percent success rate if periapical changes are evident. Many clients would like to preserve the existing dentition at all costs. Some would selectively like to save strategic teeth. Canines and carnassial teeth are large, therfore their roots occupy a large volume of space within the mandible and maxilla. They are the most common teeth pet owners choose to preserve. Others would rather extract, having no desire to save troubled teeth.

Extracting large teeth requires the creation of a mucoperiosteal flap and removal of considerable maxillary or mandibular bone, requiring post-operative pain management. Root-canal therapy, on the other hand, is relatively non-invasive.

The financial commitment may not even come into play for some; however, the majority of clients have limits in how far they will go with any procedure. However, most of us have learned that we shouldn't make financial decisions for our clients.

Is either procedure within the comfort level of the clinician? Is there a specialist within a reasonable distance from the practice who can perform either procedure? Can the patient handle extended anesthetic times required for root-canal therapy? If a crown is placed, two anesthetic episodes are required, one for preparation of the tooth and the crown impression at the time of the root-canal procedure and another for crown placement.

Please note, crowns are desired in most cases to seal the access site and minimize or eliminate microleakage at the tooth and restoration interface. This is a major reason for root-canal failure. The factors just discussed bring us to the realization that root-canal therapy should be offered as an option in any case where a structurally sound, non-vital tooth is present. Clients must be informed and allowed to make decisions based on all options.

Root-canal therapy was the client's desired option for this particular patient.

To communicate the options to our clients, it is important to understand the process involved in performing root-canal therapy. The following discussion is for client-education purposes, because this procedure is very technique-sensitive and should be performed only by veterinary dental specialists and members of the Academy of Veterinary Dentistry with extensive training in endodontics. 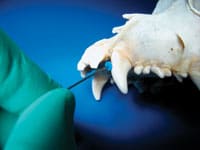 Photo 2: A root-canal file is used to remove pulp remnants, shape and clean the canal in preparation for obturation.

Necrotic pulp contents and pulp that is chronically inflamed (pulpitis) generally lead to lesions like those seen in this case where periapical bone is destroyed. Removal of the diseased pulp contents therefore is the first step to resolution. Access to the pulp may be through the fracture site or it may be at another point on the tooth that provides better straight-line access to the apex to facilitate removal (Photo 2), 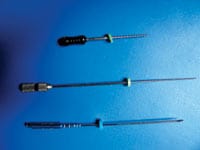 Photo 3: There are a wide variety of files and file systems. These are a few examples.

Photo 4: This is a rotary handpiece that minimizes operator fatigue. Files are made of titanium to adapt to the long-curved canals of our veterinary patients.

Access is made with a small, round carbide bur, and this coronal portion of the canal is enlarged using Gates-Glidden burs or files (Photo 3). An attempt is made to remove the pulp remnants with a barbed broach. Any of a variety of hand files or rotary filing systems are then used to remove remaining pulp, enlarge the canal and to ensure all diseased dentin is removed (Photo 4). 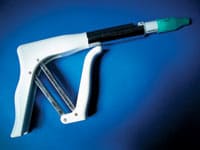 The canal is flushed between files with a number of disinfecting solutions, including chlorhexidine and sodium hypochlorite. A 17 percent EDTA solution generally is used in a final chemical bath to remove debris that may be lodged in dentinal canals as a result of filing. Once the canal is clean and disinfected, it is flushed with saline, dried and filled with any one of a very large variety of obturation materials or systems containing a sealant and a sterile rubber material called gutta-percha (Photo 5).

Depending upon materials used in obturation and sealing, the access site is prepared for a composite restoration that will seal the tooth from oral cavity fluids and microbes. Crown preparation is then performed with diamond burs. An impression is made and sent for fabrication by a dental lab. The patient returns in two to four weeks for cementation of the crown, and the procedure is monitored yearly to ensure radiographic and gross evidence of success.

Root-canal therapy is technique sensitive, requiring considerable experience and expertise. Canals vary in shape, width and length, requiring special equipment to navigate them. Although there are many factors that can cause these procedures to fail, the general thought is that success is greater than 90 percent in canals where periapical changes are not evident.

Root-canal therapy is a viable option for resolution of cases such as this one. Other indications include intrinsically discolored teeth, teeth that are grossly normal but have radiographic evidence of pulp death and teeth with abrasion or attrition where the pulp has been compromised.

An unusual gingival lesion: the resolution

Root-canal therapy was performed on this patient using rotary instrumentation. The result was radiographically sound with no voids and a good fill of the apical (root-end) portion of the canal (Photo 1). 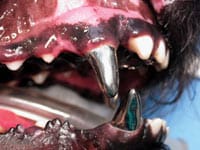 Cast-metal alloy crowns generally are recommended for most root-canal procedures to protect the access site composite from breaking down and allowing microleakage of oral fluids into the pulp cavity (Photo 2).

A major reason for root-canal failure is the inability to achieve a good, sterile seal at the apex through proper cleaning, shaping and obturation. Microleakage at the access site on the crown is another major reason for failure of root-canal procedures in humans and veterinary patients.

Cast-metal alloy crowns help minimize the potential for access-site failure. Crown placement in this particular case was discussed. The recommendation for this patient was to wait until short-term resolution of the fistula could be documented and radiographic evidence of bone fill within the existing radiographic lucency could be appreciated. 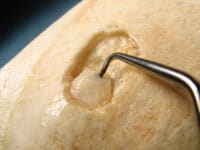 Despite recommendations for radiography at a six-month follow-up, the patient returned 11 months later for another problem. The fistula had not resolved. Radiography revealed lack of bone fill in the periapical region. 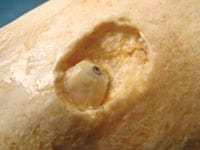 Now what are our options? Extraction is one very viable one. Redoing the root-canal procedure is certainly an option. Although the radiographic appearance suggests that the obturation is adequate, this does not ensure the perfect outcome.

A surgical root canal is a third option. A surgical (retrograde) approach will allow for immediate visual removal of all diseased periapical tissue including a portion of the root tip. This approach carries a higher possibility for success in this case.

Surgical root-canal therapy is accomplished by approaching the root-canal system through an incision over the bone at the root tip. The radiographically visible void in the bone generally represents granulation tissue, as was the case here. Cysts and abscesses are possible but are much less common. The diseased tissue in this case was extensive.

Granulation tissue was debrided and rough bone was smoothed with a curette prior to proceeding with the procedure. Generally 5 mm of root is excised with the aid of a bur on a high-speed handpiece following removal of the bone on the vestibular (lateral) aspect of the root tip. Special tips placed upon a piezoelectric scaler (Photo 3) aid in removing several millimeters of gutta percha to make room for the root-end filling material.

Although a variety of compounds historically have been used to seal the root tip, mineral trioxide aggregate (MTA) is a compound that is now widely accepted as a root-end filling material. Special instruments facilitate mixing and placement. In several hours this biologically friendly cement hardens to seal the root canal (Photo 4). 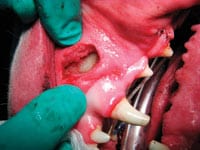 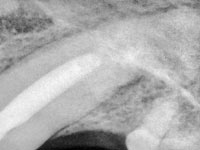 Photo 6: The radiographic appearance of the MTA placement and synthetic bioglass within the bone defect. A slight change in radiodensity at the root end represents the MTA vs. gutta percha.

In this case, a synthetic bone-graft particulate was used to fill the massive void in the bone that was left following removal of the granulation tissue and root-tip removal (Photos 5 and 6).

Resolution of the lesion was rapid. The clients, although not aware of any activity changes prior to surgery, mentioned positive activity and attitude changes three days postoperatively. Radiographic follow-up has not been an option in this case due to owner reluctance in light of continued clinical resolution and other more pressing medical issues.

Root-canal therapy in this case failed to resolve the fistula. It is likely that the degree of bone destruction prior to therapy was so extensive that root-canal therapy would fail regardless. It could be that the perfect fill was not attained, resulting in failure.

Unfortunately, most of our patients with endodontic disease don't show gross changes like this patient. Radiographic evidence usually is the only way to definitively recognize pulp death with associated root-canal diameter and periapical changes. Keep this in mind when evaluating the dentition of all of your patients. Proper diagnostics will minimize the potential for severe disease and fistula formation as seen in this patient.