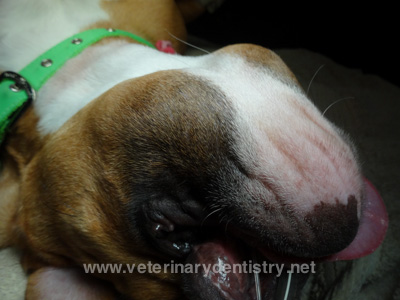 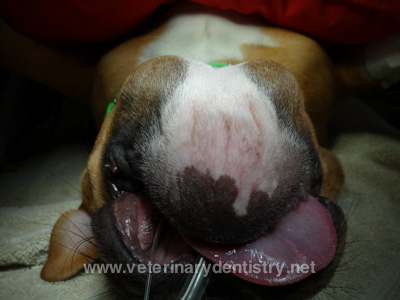 The body of the mandible from just rostral to the ramus to the second premolar was affected. 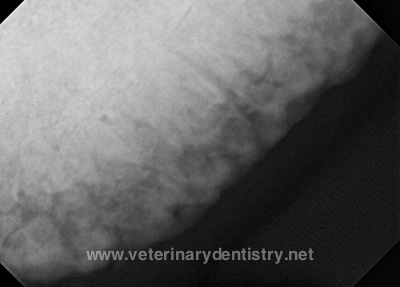 This is a radiograph of the right ventral mandible. A mottled appearance to the bone and lack of a cortex are striking features.  This is consistent with CMO described previously in the English bulldog. (see reference below) 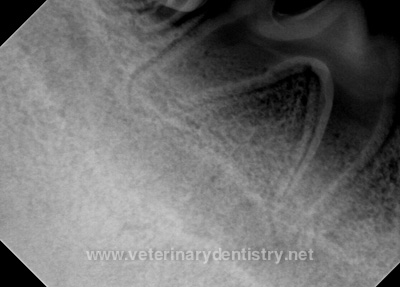 The course and severity are variable. Patients may be asymptomatic or experience varying degrees of pain.  CMO can be life threatening/life ending due to severe bony proliferation around the TMJ, causing inability to open the mouth. Calvarial hyperostosis is considered in cases with TMJ involvement. 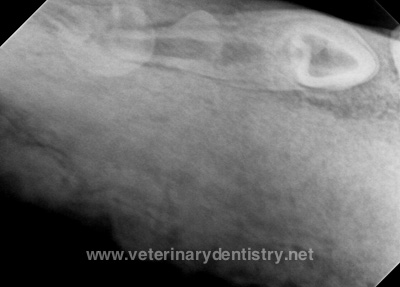 This is a ventrodorsal view of the body of the left mandible. This condition resembles calvarial hyperostosis.  In this publication, Thompson proposes a new term Idiopathic Canine Juvenile Cranial Hyperostosis for CMO and Calvarial Hyperostosis, theorizing that this is one disorder with predilection sites that vary by breed.

(Thanks to Bonnie Shope, VMD, Diplomate AVDC for sharing this reference)

Craniomandibular osteopathy is a proliferative, nonneoplastic, degenerative bone disorder, which is uncommon in dogs. It affects, mainly, the skull bones, and possibly the long bones. This disease affects more immature dogs, from three to eight months old, prepubertal, of the West Highland and Scottish terrier breeds. It is a self-limiting disease with no sex predilection. The main clinical signs are basically enlarged and painful jaw, drooling, and intermittent fever as well. Diagnosis is based on clinical, radiographic and histopathological examination. The treatment is based on pain control.

"I can’t thank Dr. Beckman enough for his mentorship and devotion to developing our dentistry skills. I never thought I’d be able to do the procedures that I have, and in a remote community, it’s a joy to see my patients benefit from that.”
Nicole Baran, DVM
Sudbury Regional Cat Hospital (Owner)
Ontario, Canada

"Attending Dr. Beckman’s canine dental wet lab was the single most valuable CE I had experienced in my then 10 years as a veterinarian.”

“I was already doing fairly good dentistry, was using dental x-rays and had good technicians, but Dr. Beckman taught me how to utilize those tools to be a better practitioner and to be more profitable.”
Dr. Geoffrey Adams
Pasco Animal Hospital
New Port Richey, Florida