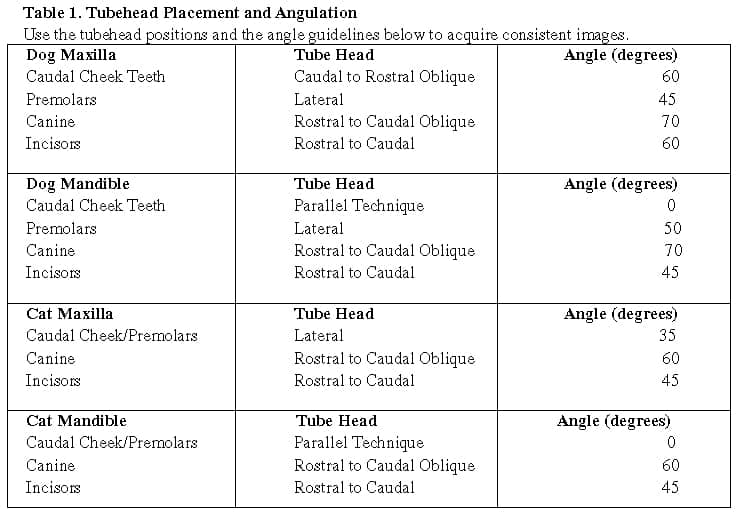 A brief explanation of the recommended materials needed to facilitate this simplified approach to veterinary dental radiographic technique will be described including film, film mounts, processors and radiography unit settings. Parallel and bisecting angle concepts will be introduced. We then eliminate some of the variables involved in taking dental X-rays and provide some simple guidelines to increase your success rate in dental radiography. Recommendations for further study to expand your knowledge in technique and positioning alternatives for specific imaging and radiographic interpretation will be made.

Digital is fast replacing film as the dental radiography system of choice. The majority of systems purchased today fall into that category. Both direct and indirect digital systems exist and will be discussed briefly although any detail is beyond the scope of the lecture.

Although film is fast losing its place in modern veterinary dentistry it is mentioned here briefly.

Speed – The most common is D speed and settings for veterinary dental x-ray units are gauged based on this speed.

Size – Size 2 and 4 film are all that is needed, minimizing inventory. Film mount inventory is also reduced.

Film mounts should be used in all cases. They provide quick review of films, provide a protective environment for storage and minimize orientation errors. Films can be loaded into film mounts directly from automatic processors and all films can be reviewed simultaneously.

Chair side manual dips tanks are messy and technique sensitive. They increase technician time due to manipulation of individual films during processing. Although fast they do not lend themselves to multiple film processing and reasonable repeat viewing during the procedure.

Automatic processors allow films to come out dry and ready for mounting. Films can easily be viewed throughout the procedure because they are mounted dry in one place and not hanging wet on individual clips. Chairside automatic processors are also available starting around $1700.

Veterinary dental radiography units have settings will vary depending upon the recording media (digital or film), the system or the patient size. Recommendations from the manufacturer will be particularly valuable for establishing a technique chart. This is extremely simple in that the only variable is time.

When we take a radiograph of a fractured limb we are using the parallel technique. This can be utilized in only one location in the dog and the cat when taking dental radiographs and that is the caudal mandible. The film/sensor is placed in the vestibule between the tongue and the mandible and the tubehead is directed parallel to the film/mandible. This can't be done for the other areas of the mouth because the oral structures prevent the film placement that would allow for a parallel technique. That wi where the bisecting angle approach comes in. We will describe this technique, attempting to simplify it and its applications.

The bisecting angle technique can be explained by applying the definition of equilateral triangles in that if two triangles have a common side, at their apex there exists an equal angle, the opposites side have the same length. Therefore the tubehead should be placed so that the primary beam is perpendicular to an imaginary line that bisects the plane of the film/sensor and the plane of the long axis of the tooth. This is confusing at best.

The bisecting angle concept of projection geometrics is an all important one, however. To simplify its application to taking consistent dental radiographs in our veterinary patients the following guidelines will eliminate some of the variables involved and hopefully simplify the process.

Either the horizontal ramus of the mandible or the hard palate is parallel to the table.

Film is placed in the mouth so that the front face of the film faces the tube head.

If using regular dental film the front of film and has a convex dot or bump on its surface. The front of the film is also white while the back of the film may be one of several colors. The dot should be facing the tubehead. The dots position within the mouth is not important. If using digital the smooth side of the sensor faces the tubehead.

If intraoral radiographs are taken, view the film with the convex portion of the dot facing you.

If an intraoral image was taken with a digital sensor it always is viewed correctly on screen. (See discussion below)

Mount radiographs as if you were looking face to face with the patient.

Following this simple guidelines you will find that when viewing your mounted radiographs:

3. The cusps face each other

Please note that when using digital sensors the image will appear correctly on the screen as discussed in the above section on mounting only if they are taken on the template in that position. In other words rather than “mounting” our digital x-rays manually after we take them as with film we are taking the image of that particular tooth with the active portion of the mounting template highlighted on the screen.

1. Atlas of Canine and Feline Dental Radiography by Mulligan, Aller and Williams.

4. and links to additional veterinary dental sites are available.

Utilizing the information provided here will allow the technician and the veterinarian to move more quickly to proficiency in veterinary dental radiography. Once you become proficient in the art of taking veterinary dental x-rays you will find yourself taking more views on more patients and finding more pathology than you ever thought possible. The individual that stands to benefit the most from this scenario is the patient.