The utilization of regional nerve blocks for oral surgery in dogs and cats is synonymous with quality patient care. This article details techniques that can be incorporated into the companion animal hospital dentistry service to maximize safety, care and comfort for patients undergoing oral surgical procedures. This discussion also suggests adopting less misleading names for the regional nerve blocks relying on simple anatomical regions blocked rather than the traditional confusing nomenclature.

Detailed descriptions of regional and local nerve blocks commonly utilized to provide analgesia for oral surgery in veterinary patients have appeared in numerous publications. Complete analgesia to the targeted tissue and a reduction in the concentration of the inhalant anesthetic are two significant benefits of proper administration of local agents. Hypotension, bradycardia, and hypoventilation are complications that can be minimized by the use of local and regional blocks for oral surgery. Local blocks eliminate the perception of pain making surgical anesthetic depths unnecessary.

This author commonly uses lidocaine and bupivicaine combined in the same syringe for regional oral nerve blocks. Lidocaine is not desirable as a sole agent due to its limited effect post administration (1-2 hours). Bupivicaine requires administration much earlier in the anesthetic event than lidocaine in order to be effective prior to surgical tissue manipulation. These limitations can be minimized or eliminated by using them in combination. The quick onset of lidocaine coupled with Bupivicaine's extended duration of effect (up to 8 hours) make them a good choice for combined use in regional nerve blocks. The agents may be used with or without epinephrine.

Although rare, complications are possible with inadvertent systemic administration or systemic uptake of locally delivered local anesthetic agents. Central nervous system excitement including seizures followed by depression, apnea, severe cardiovascular compromise, dysrhythmias and hypotension are all possible. Direct toxicity to skeletal muscle and anaphylactic reactions are possible with local administration.. The author has never experienced any of these complications at the doses recommended in this article.

A maximum dose of 1.0 mg/kg of each agent in combination in the same syringe is recommended. Care should be exercised, especially in smaller patients and cats, so that maximum doses are not exceeded. The ratio of lidocaine:bupivicaine is 1:4 when using concentrations of 2% and 0.5 % respectively. The total volume used depends upon the size of the patient and the number of sites that require analgesia. The maximum number of sites would be four if the patient requires surgical manipulation in all four quadrants. Table 1 shows recommended infusion volumes per site based upon patient size. Please note that these volumes represent both agents mixed together. Table 2 shows a sample calculation for a 4 kg dog. 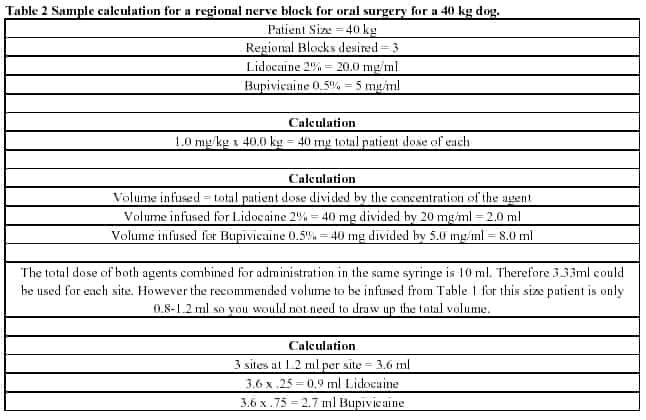 Physiologic parameters will determine if the block is effective. If blood pressure, heart rate and respiration rate increase with surgical manipulation the block either was not correctly placed or hasn't had the proper amount of time for onset. (5 minutes) If enough time has elapsed to be comfortable that onset is not an issue the block may be repeated as long as the maximum total dose is not exceeded. It should be noted that the low ph of inflamed tissue will render local anesthetics less effective.

Based upon human research the use of local analgesics and opiates in combination provides extended duration of action. The addition of morphinec or buprenorphine to a regional brachial plexus block for limb amputation demonstrated close to a twofold increase in duration of effect over patients receiving only bupivicaine in one study. A similar model was used in another study where researchers demonstrated that the addition of buprenorphined to the regional block provided significant increases in duration compared to giving the buprenorphined intramuscularly.

None of the regional nerve blocks for oral surgery in dogs and cats need any special equipment to employ. A tuberculin syringe with a 5/8″ 25 gauge needle is used for patients 4 kg or less. Three or six ml syringes with 22-25 gauge 3/4″ needles are used for patients over 4 kg depending upon the volume to be infused. The correct dose of the desired agents is drawn. The needle is advanced to the desired location. Aspiration is performed to ensure that the needle is not in a vessel and the agent is dispersed. If one encounters a vessel the needle is redirected and aspiration repeated. Once extravascular placement is confirmed the agent is administered. Be careful not to advance the needle during injection to avoid inadvertent vessel penetration.

Four regional nerve blocks are commonly utilized to provide local analgesia to the different regions of the oral cavity. These blocks have confusing nomenclature in that the block may refer to the region blocked or the actual nerve that is blocked. This discussion suggests simplification and clarification of nomenclature to describe the region affected rather than the nerve blocked.

The regional nerve blocks for oral surgery are similar for the dog and the cat. Some anatomical differences do exist however. Variations in the approach to the cat will be described following the discussion of these four regional blocks for the dog. The proposed new names are followed by the often confusing traditional names of these blocks in parentheses.

The rostral maxillary block provides infiltration of the lidocaine/bupivicaine combination adjacent to the infraorbital nerve and the rostral maxillary alveolar nerve within the infraorbital canal. The latter leaves the inferior alveolar nerve within the canal to enter the incisivomaxillary foramen to innervate the canine and incisor teeth. In addition the first three premolar teeth as well as the maxillary bone and surrounding soft tissue are affected. To perform this block, retract the lip dorsally. Palpate the infraorbital neurovascular bundle beneath the vestibular mucosa. This is a large cylindrical band that exits the infraorbital canal dorsal to the distal root of the maxillary third premolar. The thumb of one hand can be used to retract the bundle dorsally. With the opposite hand the needle is advanced close to the maxillary bone ventral to the retracted bundle in a rostral to caudal direction to a point just inside the canal. The needle should pass without engaging bone. If bone is encountered the needle is withdrawn slightly and redirected until it passes resistance free into the canal. Proper insertion can be confirmed by gentle lateral movement of the syringe whereby the needle will meet resistance with the lateral canal wall.

The caudal maxillary block allows infiltration of the local anesthetic combination adjacent to the infraorbital nerve and the pterygopalatine nerve caudal to the second maxillary molar. These nerves are branches of the maxillary nerve that supply sensory innervation to the maxilla. In addition to the structures affected by the infraorbital block it will anesthetize the caudal cheek teeth and associated bone and soft tissue. The soft palatal mucosa and hard palatal mucosa and bone will also be affected by this block. To perform this block the mouth is opened wide and the lips retracted caudally at the lateral commissure. The needle is directed in a dorsal direction immediately behind the central portion of the maxillary second molar tooth. Advancement of the needle need not be more than a 2-4 millimeters depending upon patient size.

The rostral mandibular block infiltrates the rostral extent of the inferior alveolar nerve just before it exits the middle mental foramen. The structures anesthetized include the incisors, the canine and the first three premolars. The adjacent bone and soft tissue are also affected. The middle mental foramen is located about 1/3 of the distance from the ventral border to the dorsal border of the mandible at the level of the mesial root of the second premolar. The landmark for infiltration is the mandibular labial frenulum. The frenulum is retracted ventrally. The needle is inserted at the rostral aspect of the frenulum and advanced along the mandibular bone to just enter the canal. If bone is encountered the needle should be backed out and redirected until the needle passes freely into the foramen. Placement can be confirmed by moving the syringe laterally to encounter the lateral aspect of the canal. The patient's jaw, rather than the alveolar mucosa, will move slightly if the needle is within the canal.

The caudal mandibular block is performed by infiltrating the inferior alveolar nerve prior to its entry into the mandibular foramen on the lingual aspect of the caudal mandibular body. The lateral canthus of the eye is the landmark for this block. An imaginary plumb line is drawn from the lateral canthus of the eye directly to the ventral mandible. The needle is inserted into the skin at the lingual aspect of the ventral mandible at this point. The needle is advanced along the bone following the imaginary plumb line to a point 1/3 of the distance from the ventral to the dorsal mandible. The needle will now be in the vicinity of the mandibular foramen where the inferior alveolar nerve enters the mandibular canal. It is not critical to be exactly at the foramen. Radiographic dye studies indicate that the agent diffuses to encompass a large area around the point of infusion. This technique blocks all of the teeth of the mandible on the side of infiltration as well as the adjacent bone and soft tissue.

Although very uncommon, patients receiving an caudal mandibular nerve block have been known to traumatize their tongues by mastication in the postoperative period. Observation and proper recovery assistance during this period will eliminate this complication. Staff members monitoring the recovering patient should ensure visual confirmation that the tongue is not trapped between the carnassial teeth if the patient is recovered in lateral recumbency. Maintaining the patient in sternal recumbency precludes the tongue deviation expected when a patient is laterally recumbent.

Anatomical differences between species require slight variations in technique when considering nerve blocks in cats. When performing the rostral maxillary (infraorbital) nerve block in cats the approach is the same as described in the dog, however the infraorbital foramen is relatively more dorsal in the cat. Therefore needle should be inserted more dorsally and then advanced in a rostral to caudal direction into the infraorbital foramen. As in the dog the needle should not engage bone and should pass directly into the foramen.

The infraorbital canal in cats is also much shorter and the foramen relatively larger than that found in the dog. Because the canal is only a few millimeters long administration of the agent into the canal also places it adjacent to the infraorbital and pterygopalatine nerves. This results in creating the same effect as the caudal maxillary nerve block in dogs. In this discussion it is suggested that the single nerve block for the cat maxilla be termed the maxillary nerve block since it is performed as is the rostral maxillary block in dogs but blocks the same region as the caudal maxillary block.

Cats have no mandibular first and second premolars, therefore the middle mental foramen in the cat is located midway between the mandibular canine and third premolar. Only in very small cats is this foramen not accessible to needle placement for administration of the rostral mandibular block. If one encounters difficulty the caudal mandibular block may be used as an alternative.

Regional nerve blocks for oral surgery are valuable tools in enhancing patient safety intraoperatively and patient comfort postoperatively. They are easy to administer and require no special equipment to perform. Their use encourages quick return to normal mastication and continuation of normal food and water intake shortly after oral procedures. Incorporation of oral regional nerve blocks into the dentistry service is paramount in providing the best in patient care. Simplification and clarification of nomenclature should be considered to eliminate confusion between descriptions of actual anatomical regions and the nerves themselves.