Management of a locally aggressive mandibular mass in a dog

Benign and malignant oral masses are commonly encountered in the oral cavities of dogs and cats. Benign oral masses found within the oral cavity do not metastasize, but they are often locally invasive. The behavior of malignant masses are type- and, in some cases, site-dependent. This case describes a patient with such a mass and outlines the importance of early detection and intervention of oral masses in veterinary patients.

Photo 1: A right mandibular acanthomatous ameloblastoma extending to the midline in the patient in this case. A surgical approach to remove the mass requires a bilateral rostral mandibulectomy.

A 9-year-old neutered male Standard Poodle was presented for evaluation of a 3-cm-diameter right mandibular mass extending from the distal aspect of the canine to the mesial aspect of the third premolar (Photo 1). The dorsal and central portion of the mass demonstrated a cavitation secondary to trauma from the opposing maxillary premolar. The owners reported recent minor oral hemorrhage, seen as blood-tinged saliva. No discomfort was apparent on palpation of the mass, the surrounding bone or the adjacent soft tissue.

What should be done before biopsy?

Discussion of the options and intent of treatment with this patient's pet owners is essential. They should understand that most oral masses can be successfully resected surgically. A discussion of potential common malignancies and their systemic potential is also indicated. The worst prognosis comes with oral melanoma that is quick to metastasize. Squamous cell carcinoma carries a poor prognosis if tonsillar involvement is present, but curative excision is possible in other oral locations if the mass is detected prior to distant metastasis. Only 20 percent of fibrosarcomas metastasize, and excision plus or minus radiation and chemotherapy are options. Pet owners must understand that masses of this size and extent often require partial jaw removal. If they are unwilling to pursue therapy, biopsy is of no value to the patient.

In this case, the patient was anesthetized, and a deep wedge-shaped biopsy sample of the mass was obtained rostrally, avoiding the traumatized portion. No sutures were placed, and bleeding was minimal. Histopathologic examination revealed acanthomatous ameloblastoma. Formerly classified as acanthomatous epulis, acanthomatous ameloblastoma is a common benign but locally invasive tumor. Surgical resection by a board-certified veterinary dentist or surgeon is the treatment of choice for this condition.

What considerations will be discussed with this client upon referral?

Had this been a malignancy, diagnostic tests to determine metastasis and staging would have predicated excision. In the case of any locally aggressive oral mass, margin determination is ideally determined by computed tomography (CT). In this case, CT was not readily available, and margin estimation was based on gross appearance because of the lack of radiographic changes. In patients with acanthomatous ameloblastoma, a mandibulectomy or maxillectomy with a minimum of 1-cm margins is the treatment of choice for definitive resolution. 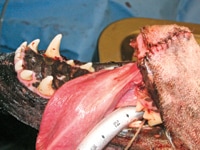 Photo 2: This immediate postoperative image of the patient shows the extent of mandibular tissue excision. Safe margins into normal tissue extend to the fourth premolar bilaterally.

Client education should also involve discussions regarding postoperative appearance and function. Pictures of past cases with similar procedures provide pet parents a glimpse of postoperative cosmesis. Bilateral mandibulectomies involving excision caudal to the mandibular symphysis result in elimination of direct anatomical communication between the two mandibles. Lateral and ventral tongue deviation, drooling, and difficulty with food prehension and swallowing are expected and may be temporary or permanent. Despite these alterations, patients generally retain an excellent quality of life and adapt to the resulting anatomical alterations quickly. 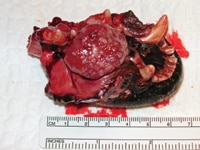 Photo 3: Margins should extend at least 1 cm into normal tissue.

Because the mass in this patient extended to the midline, bilateral rostral mandibulectomy distal to the right mandibular third premolar and distal to the left mandibular second premolar was performed (Photos 2 and 3,). A fentanyl analgesic patch was placed upon admission. Additional pre-emptive pain management included an opiate and an NSAID. Bilateral inferior alveolar nerve blocks were used for maximal intraoperative anesthetic safety and ideal postoperative patient comfort. 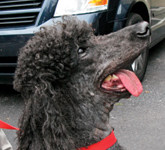 Photo 4: The patient at discharge 48 hours after the procedure.

Recovery was uneventful, and the patient was able to lap soft food gruel within two hours of waking. An esophagostomy feeding tube is an option for patients undergoing mandibulectomy and maxillectomy, but this is not generally necessary. An Elizabethan collar was placed as a precaution to preclude self-trauma, and two days later the patient was discharged (Photo 4). A recheck for patch removal and evaluation was scheduled with the referring veterinarian in three days. For continued pain management, an NSAID and tramadol were dispensed for four additional days. Soft food was recommended for two weeks.

Photo 5: The patient 18 months after the procedure; there was no evidence of recurrence.

Anticipated clinical changes included lateral and ventral tongue deviation and minor drooling. Gruel was changed to soft food at two weeks. Initially, the owners found that hand feeding aided in prehension. The patient quickly learned to prehend soft food from a plate by tilting its head to the side. Although patients can eat kibble after bilateral mandibulectomy, this patient preferred canned food, and the owners chose to continue it. The patient returned 30 days and 18 months after surgery and showed no complications or evidence of recurrence (Photo 5).

Benign and malignant oral masses are indistinguishable grossly, and histopathologic examination must be performed to determine the disposition of all oral masses. Early detection and excision are paramount in either case. Staging is required for any malignancy. Surgical, radiation and chemotherapy options must be weighed and discussed with the pet's guardian, depending on the tumor type and location within the oral cavity. As seen here, mandibulectomy can be used to eliminate aggressive mandibular masses while retaining function and quality of life.