Home » Dental Cases » Epulis in a Dog in Atlanta

Epulis in a Dog in Atlanta 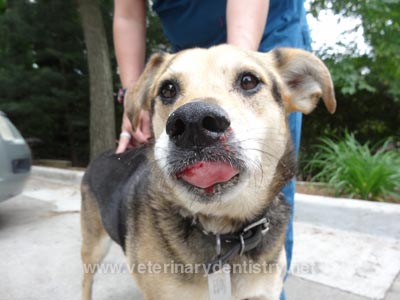 This is an epulis in a dog in Atlanta.

An epulis is a tumor located in the gum tissue surrounding the dog’s teeth. The tumor originates from the tissue that connects the teeth to the bone of the jaw. These tumors are benign. They tend to invade nearby oral tissue and will require the removal of the tumor growth and surrounding tissue.

There are three types:

Signs include a lump on the gums, drooling, halitosis, facial deformity, and other signs of mouth injury. The visible lump is the most common sign.

A dog epulis is now classified as a fibroosseous epulis. 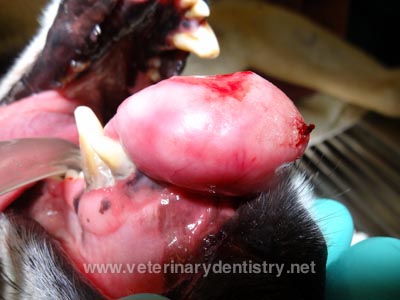 The diagnosis begins with a visual examination of the mouth.

Radiographs of the head can determine how invasive the tumor is.

Biopsy and histopathological (microscopic) examination of the lump will determine which type of epulis is present. 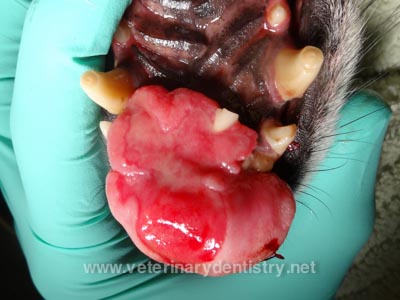 Surgery for a fibrooseous epulis in a dog involves the removal of the soft tissue, bone, and affected teeth.

In some inoperable epulis cases, radiation therapy may help.

After surgery, your pet may need a softer diet.

The less tissue involved, the better. If a large section of the jaw has to be removed, it can affect the dog’s quality of life.

The oral tumors don’t usually recur if the entire tumor has been removed. However, some can. Checking your dog’s mouth frequently will help you spot any tumor recurrence or new tumors.

Occasionally, an acanthomatous epulis is treated with radiation therapy or chemotherapy.

Once we know what we are dealing with, we know how to treat an epulis. The difficulty is to diagnose it early. 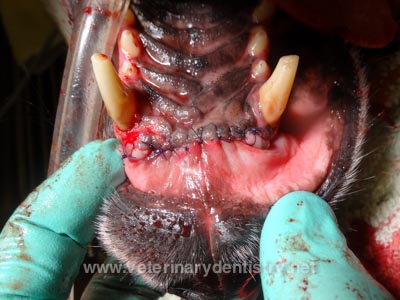 Postoperative View After Removal of the Epulis