Stomatitis generally is thought of as a feline disease. Although it is seen much more frequently in cats, dogs can present with stomatitis as well.

A thorough evaluation of the patient is indicated when stomatitis is present. The dental case this month had an unusual presentation that resulted in an unusual diagnosis.

Photo 2: A severely erythematous palatal mucosa is uncharacteristic of stomatitis in the dog. (Photos courtesy of Dr. Brett Beckman)

Presented with profound generalized oral mucosal ery-thema, stomatitis and mucopurulent oral and nasal discharge with severe halitosis (Photo 1). The entire palatal mucosa was equally affected (Photo 2), but the margins of the tongue were not. Dried crusts of mucous almost obliterated the nasal openings bilaterally. The nasal discharge occurred some weeks following the onset of the oral signs. A previous biopsy from the referring veterinarian revealed inflammation consistent with stomatitis. 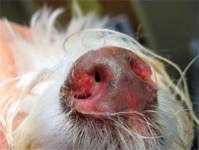 This patient did not show any reluctance to oral manipulation, which was quite uncharacteristic for this kind of presentation. Most patients with this pathology are in pain, so sedation often is required for a complete evaluation. Palpation of the tissue did, however, repeatedly induce avoidance behavior consistent with oral pain. Upon removal of the dried mucous crusts surrounding the nasal openings, nasal mucosal hyperemia was excessive, approximating the scale of that found in the oral cavity (Photo 3). Based on the initial biopsy at the referring practice suggesting primary stomatitis, what do you tell the owners at this point?

Stomatitis in dogs is a painful condition generally poorly responsive to conservative management. Frequent professional dental prophylaxis is the initial approach to therapy followed by strict adherence to a home-care regimen. Brushing a minimum of once daily is the basis of conservative therapy. Chlorhexidine daily gel, plaque-retardant sealants, water additives and enzymatic chews may serve as adjunctive therapy. In many cases, strict adherence to home care alleviates signs only for three to six months before professional prophylaxis is required. Immunosuppressive agents may offer short-term benefits; however, long-term therapy generally is unrewarding and has obvious detrimental long-term effects.

In some cases, extraction of teeth adjacent to affected areas is indicated. In generalized cases, this may require full-mouth extractions.

Now that you have thoroughly discussed primary stomatitis, we are ready to make our therapeutic recommendations. Or are we? What clinical signs normally present with cases of stomatitis just don't fit this case?

Profound nasal mucositis and generalized palatal involvement are not commonly seen. Typically the palatal mucosa is affected immediately adjacent to the tooth/palate interface. In this case, the entire mucosa was affected. Nasal discharge might be a secondary factor or a separate entity, but the degree of hyperemia strikes an unusual chord in this case.

In an attempt to determine a specific etiology, a biopsy was taken of the nasal mucosa, including a portion of the alar fold, the lip margin and oral mucosa, and submitted for histopathology. Consultation with dermatology resulted in a trial of immunosuppressive doses of prednisone and a broad-spectrum antibiotic. Interestingly enough, both samples in this second biopsy were consistent with erythema multiforme, which is a rare ulcerative dermatosis associated with host-specific T lymphocyte cell-mediated hypersensitivity. (See suggested reading, p. 10S.)

Infections, drug therapy and food have been implicated. However, a large percentage of cases are idiopathic. Vesicles and ulcerations are common oral mucosal changes. Ulcers commonly are covered by a gray-white film consistent with those seen in this case. The oral mucosa is a common site for lesion predilection with this condition.

Spontaneous regression has been reported in a matter of weeks to months. Definitive resolution occurs if the cause can be determined and resolved. The use of immunosuppressive drugs is not without controversy and is usually reserved for more severe cases where a cause cannot be determined. Anecdotal evidence suggests that cyclosporine may be of benefit in canine idiopathic erythema multiforme. 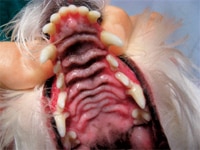 Photo 4:The patient showed a dramatic response in the palatal mucosa following immunosuppressive doses of prednisone.

Two weeks later, the dermatology service reported much improvement in the degree of stomatitis. The doctor tapered the dosage of prednisone and discontinued the antibiotic. Two weeks after a recheck with the dentistry service, the doctors noted an appreciably positive response in the palatal mucosa (Photo 4, p. 9S). But the caudal buccal mucosa showed epithelial sloughing and severe stomatitis (Photo 5, p. 9S). No other potential causes co-existed with onset, and the initial biopsy didn't show changes characteristic of erythema multiforme.

Taking into consideration historical and clinical aspects of this case, it might be logical to speculate that the stomatitis was the primary disease, subsequently resulting in erythema multiforme. It is, however, impossible to make this conclusion definitively. The etiology of individual cases of this disease is difficult to determine. 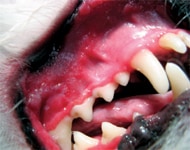 Another diagnostic consideration is chronic ulcerative paradental stomatitis (CUPS) which resembles stomatitis and has similar histopathology. With CUPS, mucosal irritation occurs in regions where the tissue contacts the tooth. Unfortunately, original classification was not possible in that we did not observe this patient until after the erythema multiforme was present.

At this point in the work-up, the owners opted to maintain this patient on immunosuppressive doses of prednisone. If stomatitis is the inciting factor, extractions would likely result in complete resolution. Unfortunately, we may not have the opportunity to find out. Updates regarding any change in owner sentiment resulting in a different long-term plan will be discussed in future issues.